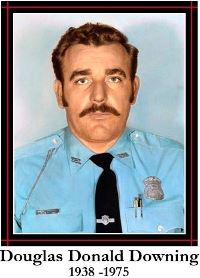 Officer Douglas Downing lost his life when he was shot during a bank robbery on July 11, 1975.  According to witnesses, three men entered the bank at Park and Michigan through a rear door and ordered the employees and customers to lie on the floor.  As the robbers gathered money from the teller stations, someone triggered the silent alarm.  Officer Downing responded to the alarm and made entry through the back door.  A struggle ensued with one of the robbers and Officer Downing was shot three times in the chest.  He was dead at the scene.

The robbers then fled out the door and entered a 1974, burnt orange Cadillac where a getaway driver was waiting.  The Cadillac sped away with the Ypsilanti Police in hot pursuit.  After a short distance, the vehicle lost control and smashed into a wall.  As the robbers fled on foot, one was shot, another was captured and a third escaped but was arrested several day later.

This was not the first time that Officer Downing faced danger in the line of duty.  He was twice before awarded a Meritorious Action Citation for courage and outstanding performance of duty. The first was for his dedicated work in the apprehension of a suspect in a Breaking and Entering case in 1971 and the second was for disarming a citizen that was threatening him with a rifle in 1972.